All my books have grown out of images – Claude Simon, Nobel prize laureate in literature, with a past as a painter, is just as clear as he is generous in his definition of images : a remembrance, a photo, a postcard, a publicity poster, a visual impression, a painting – all equally important, situated on the same level as stimuli, launching and nourishing the writing process. Even so, for Simon-readers, it seems that paintings and painters – from Poussin to Picasso, from Caravaggio to Robert Rauschenberg and Gastone Novelli – are privileged furnishers of central premises for Claude Simon’s depictions of life. At least it seemed so to me. Maybe because my own knowledge in the field of painting is so limited, and that I have so much to learn….

So, what is it that makes painting as art form so stimulating? And sometimes so provocative, so challenging, and at times just overwhelming, leaving us marked by its beauty. A painting – and also a writing – is always moored, situated; we are being presented to the painter’s, or the writer’s point de vue, his or her glance at the world and its connections. We learn to see, may be for the first time, things that until then we had not yet noticed, learn to see in a new way, see similarities, resemblances previously neglected, discover the beauty in something we had not seen as beautiful before.

The only truth that counts in art is the truth of the senses. Claude Simon again, more surprisingly perhaps. When a painter, again and again, comes back to the same mountain, the same church front, the same woman’s face, with small alterations of angles and light, it is to try out the «properties» of painting – its possibilities, its technical and plastic potentialities; but also to express an emotional engagement in the object being portrayed, an effort to establish contact, to make it speak – to us, and with us.

This exploring of the emotional and plastic qualities of painting, its composition, has been essential in modern painting (that is for more than a hundred years now). More important than the ‘model’ is the relationship between various forms, between form and colour, between shades of the ‘same’ colour, between harmonies and disharmonies, in sum the rhythm of the painting. Not surpisingly, the guitar became a recurring figure of Picasso’s cubism.

Rhythm, movement, dance,: words that better than any describe Karin Køltzow’s art of painting. The movement of the brush strokes; fast, vigorous, in large as well as in small formats, always sensitive, in accordance with the particularity of the material, the charcoal, the chalk, the tempera, the paper. Dance and music are constant themes in Karin Køltzow’s paintings. The series Symphonic landscapes, therefore, proposes a very appropriate title for a broad selection of her works.

Portraits, of animals and people, often united on the same canvas, also make an important part of Karin Køltzow’s universe. I wonder if there exist more expressive heads of cows in Norwegian art than hers; or more aristocratic dromedaries anywhere in the world! In her artist world she also brings forward political, inflammable themes in strikingly contrasting forms and colours.

The colour puts a distinctive mark to this universe. Charcoal, in nuances from deep black to deep brown, by itself or in combination with red ochre or upon layers of tempera, gives warmth and structure to the large formats. And all who have seen the deep blue colour of Karin Køltzow, a mix of ultramarine, burnt umber and white, will recognize it as her particular device.

The beauty of a helicopter big bag! We end where we started; in reality and the center of life – sensing, seeing and being able to bring this center forward for all of us to see. ‘Big Bags’ – moving, dissolving – or just standing there in front of us …

Karin Holter is professor emerita in French literature in Norway

One day in October 1994 I am in Karin Køltzow’s studio, invited to assist her during a television interview. The reporter from Norwegian TV2 is interested in her book to be launched ‘Asphalt or violins?‘, but an interview with the writer is not e
nough for him, he wants to see the painter in action at the easel. And the painter is ready; she grasps a bit of charcoal
and the ne
arest model available and works while camera is recording. She works fast and without hesitation – like a street
artist; but no street art occurs. In few minutes she catches something that I recognise without doubt as being me. Something that goes deeper than the portrait likeness, which in itself is striking – there and then it dawned upon me what an outstanding drafts(wo)man Karin Køltzow is.

Surely I had seen and admired Karin’s art before, and had been struck by her special understanding of animals – sheep, cows, hens, oxes, cocks, dromedaries. All taken down on paper while her eyes register humour, soreness, character. Her understanding of course also includes humans, in particular the newborn. The newer and smaller, the more interesting. She searches to catch the precocious, inscrutable expression present during the first hours after delivery. After being protected for nine months in mother’s womb comes expulsion – a slow moving out painful to mother and child – but the same expulsion seems to let us come near to the volatile knowledge of the source of existence. To catch this volatility must be extremely difficult and challenging and inspiring for an unorthodox, instant artist like Karin.

However, this day in 1994, strings and her new book were in focus. She had been invited to follow the Oslo Philharmonic on rehearsals and on a tour to capital cities in Europe; days that resulted in a series of charcoal drawings – always charcoal – and the essay ‘Asphalt or violins?’ (Emilia 1994) – our most mentioned and debated book ever. Her topic was culture and cost-benefit analyses. With her previous background as a research officer at the Norwegian Institute of Transport Economics she was extremely qualified in debating why road building always was the winner of public funding and why culture was let down. She turned the politicians’ and economists’ thinking 180 degrees around and showed that investing in culture could be of the same cost-benefit gain for society. Her argumentation was widely spread in Norway through principal media, research periodicals and non 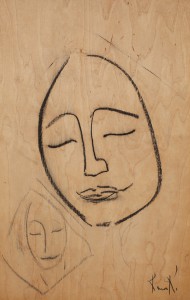 -governmental organisations and was even debated in the Parliament (Stortinget).

The painter enjoyed the debates in the limelight, a position much opposite to the quiet daily life in the studio. Karin is a gifted artist and is able to use her creativity as an essay writer with the same expressive temperament that we see in her paintings and drawings. She defended her arguments in the asphalt-or-violin-essay with bravery, and we felt her exclamation marks also in her verbal defense. But she engaged in more than a verbal defense of her point of view on cost-benefit-thinking. The two-year long debating period following the edition of ‘Asphalt or Violins?’ resulted in another book, ‘Trumpets and Bassoons! On culture and growth of big cities’ (Emilia 2003) where the main point was society’s responsability to invest in culture. Her argumentation was rooted in humanistics as well as in economic analyses. With exclamation marks, of course! A necessity for a person, engaged and impatient, a whistle-blower in writing and drawings – and increasingly distinct with age. No one can see her red paintings about conflict and migration without being deeply shaken.

As her editor I have followed her undertakings for 25 years now. She still has undone tasks on her agenda, and if my feeling is right, she will continue to use the right of freedom to speak with a clear voice, whether she will express herself in a stringent intellectual language or through her personal lyrical poetry.

However, it is her work as a painter and draftsman that will be her great legacy.    Borderbreaking and superbe as it is, it leaves me with a feeling of awe.

So nice, then, to think of all the fun we had while Karin Køltzow got the better of economists and their road building ideology.

Ingebjørg Nesheim is publisher and editor at Emilia Press AS.

Scroll to top
Behandle samtykke for informasjonskapsler
To provide the best experiences, we use technologies like cookies to store and/or access device information. Consenting to these technologies will allow us to process data such as browsing behavior or unique IDs on this site. Not consenting or withdrawing consent, may adversely affect certain features and functions.
Manage options Manage services Manage vendors Read more about these purposes
Vis preferanser
{title} {title} {title}